Home / Newsroom / From Seed to Harvest: How Oil Palm is Grown

From Seed to Harvest: How Oil Palm is Grown

You may recognize it on the ingredient list of most of your favorite products, but do you know how oil palm is grown? Let’s take a look at the journey palm oil takes from seed to harvest.

The oil palm (Elaeis guineensis) originated in West Africa. Discovered in Egyptian tombs, evidence of oil palm use dates back 5,000 years! Because people were buried with casks of palm oil, it’s been suggested that palm oil had a high societal value.

Leading into the 20th century, palm oil use expanded with overseas trade. Considered the driving force behind industrial production, the nutrient rich red oil found use in candle making, industrial lubricants, and as food for sailors on long seafaring voyages.1

After significant expansion of oil palm plantations throughout Africa, the plant was exported to Southeast Asia where it was first planted as an ornamental crop. There, the first commercial scale plantation was founded in Malaysia in 1917. Oil palm later began to take on a commercial role with plantations across Malaysia and Indonesia as its economic value became apparent and its ability to meet a big chunk of the world’s vegetable oil needs efficiently.

Palm oil: From seed to harvest

Over the last hundred years, a lot of R&D has gone into improving oil palm yields including optimizing the varieties planted to favor higher oil-yielding varieties. Starting with oil palm seeds, a cultivator will need to find the best climate for the crop to thrive. Oil palm does best in tropical latitudes, which is why oil palm is produced in countries like Indonesia, Malaysia, Colombia, and Nigeria. In Malaysia and Indonesia, the largest producers of the commodity, smallholder production represents approximately 40% of the total oil palm plantation area.

Over several months, seeds grow into seedlings in nurseries. After around 12 months, they’re transferred to the plantation just before the rainy season starts. They’re arranged in a formation that allows for maximum sunlight to reach each plant. Throughout this process, their growth is supported to keep pests at bay and provide the young palms with proper nutrition.

How many years does an oil palm take to grow?

The ripe fruit bunches of palms are commonly referred to as Fresh Fruit Bunches (FFBs) which are typically ready to be harvested when the oil palms reaches 3 years of age. The plants will continue to be productive for up to 25 years. 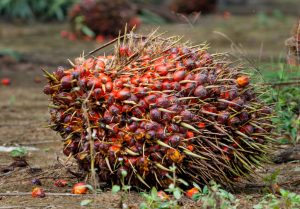 How is palm oil harvested?

When the fruit on the oil palm turns bright red-orange, it indicates that it’s ripe and ready to be harvested. A chisel or long sickle is used to harvest the FFB, which is then transported to a mill to be processed.

How much palm oil does one tree produce?

Oil palm yields are highly responsive to the environment, and yields also vary depending on the age of the plant. The FFBs produced by oil palms typically weigh between 5 to 20 kg, or more. All in all, mature palms in Indonesia and Malaysia can produce on average, 18 to 30 tons of FFB per hectare per year. 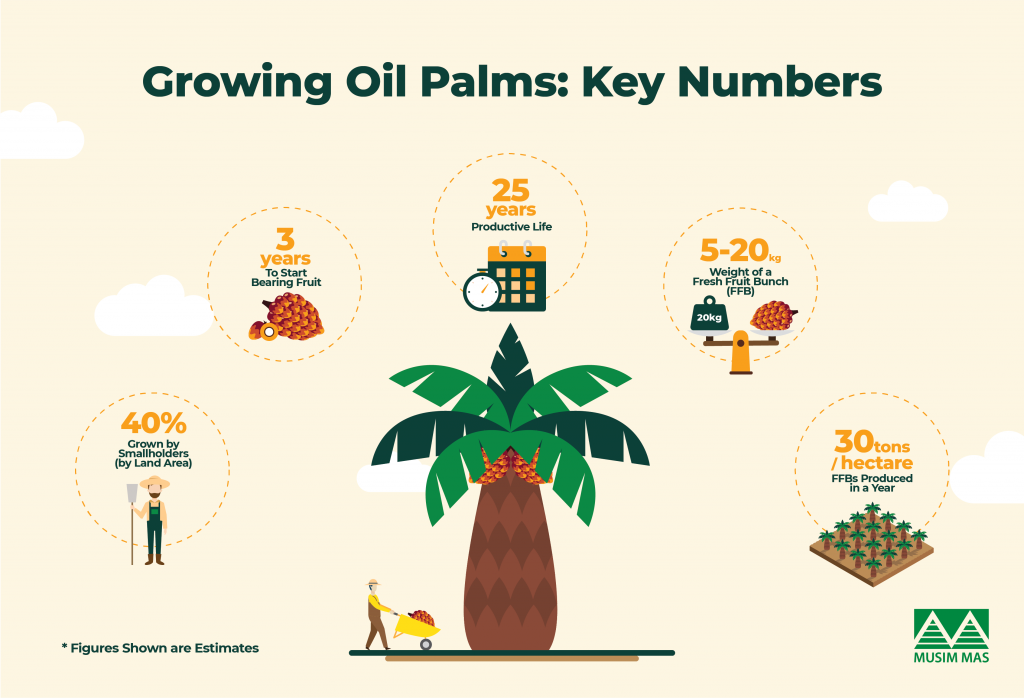