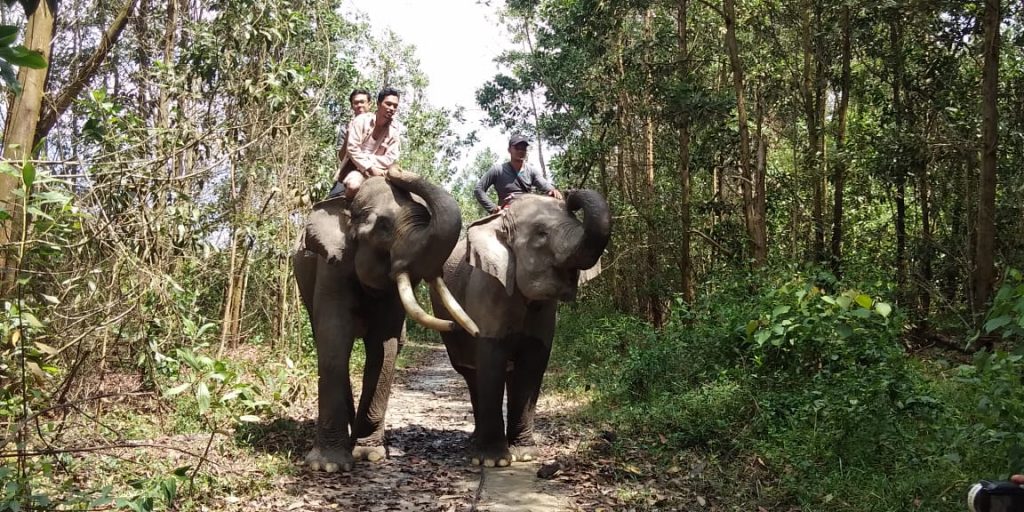 Our flying squad team: Nurdinsyah, Rio, and Wira Ganda, are on patrol with our trained elephants, Dono (left) and Novi (right)

The collaboration aims to improve the team’s capacity called the Flying Squad, educating the local community on the vulnerability of elephants and the vision of coexistence between elephants and communities.

This year, Musim Mas pledged USD 130,000 (IDR 1.8 billion) to fund the project for the next three years starting from this February. Part of our funding will be used to introduce new technologies into the project, such as drones, Global Positioning System (GPS) collars for the elephants, and satellite tracking systems.

These technologies will alert the team when the elephants stray too close to human habitats, from monitoring elephants to empowering the Flying Squad. This approach will better protect both elephants and humans in vulnerable landscapes.

This project is also in line with the Government’s conservation vision for Riau. We have been developing a Conservation Strategy and Action Plan (SRAK) for elephants through our partnership with local stakeholders. SRAK is a regional guideline on elephant management.

First started in 2006, Musim Mas’ partnership with the Flying Squad has continuously been renewed given the project’s progress and our commitment to achieving conservation outcomes. Over the last three years, YTNTN has reported zero elephant deaths due to conflict, increasing elephant population, and declining incidences of elephant killings.

“Mitigating human-elephant conflict will contribute to conserving elephant species and its habitat. This is also part of Musim Mas’ sustainability commitment to deliver positive environmental impacts, and the Flying Squad is an innovative approach,” said Olivier Tichit, Director of Sustainable Supply Chain of Musim Mas. “On a wider scale, we are happy to be contributing to the development of Indonesia’s National Action Plan for elephant conservation by continuing this project in the Tesso Nilo National Park.”

“The cooperation of PT Musim Mas and YTNTN in mitigating Human-Elephant Conflict in the Tesso Nilo Landscape have succeeded in reducing elephant deaths and human losses due to conflict. A mitigation team (also known as the Flying Squad) consisting of Mahouts and captive elephants was funded to respond quickly to the conflict. In 2020, there will only be two elephant deaths from non-natural causes in Tesso Nilo, and more conflicts can be mitigated,” said Yuliantony, Executive Director of YTNTN. “This collaboration can be a model in elephant conservation, especially in reducing the negative consequences of human-elephant conflict. We thank PT Musim Mas for his contribution to protecting elephants in Tesso Nilo.”

“Flying Squad managed by YTNTN, and PT Musim Mas has made a major contribution in managing Sumatran Elephant welfare. Through hard work and quick action, the Flying Squad helps Tesso Nilo National Park Authority reduce the total number of human-elephant conflict in the northern part of the Tesso Nilo National Park area and its buffer zone. It also raises the awareness of biodiversity conservation for the local community,” said Andre Hansen Siregar, S.Hut., T., M, Sc., Head of Balai Taman Nasional Tesso Nilo. “As part of Conservation Strategy and Action Plan of Sumatran Elephant, Flying Squad existence has given massive help for the government to maintain Sumatran Elephant population in Riau Province. We give our appreciation and hope that this collaboration can continue for a long time.”