Jakarta, Indonesia – The Siak government, together with a coalition of companies comprising Cargill, Danone, Musim Mas, Neste, PepsiCo, Sinar Mas Agribusiness and Food, and Unilever, as well as Daemeter and Proforest, yesterday announced a collaboration to implement a new landscape program. The announcement was made during the Otonomi Expo of the Association of Indonesian Districts (Apkasi), where special attention was given to regional competitiveness of districts in their readiness to achieve the Sustainable Development Goals. 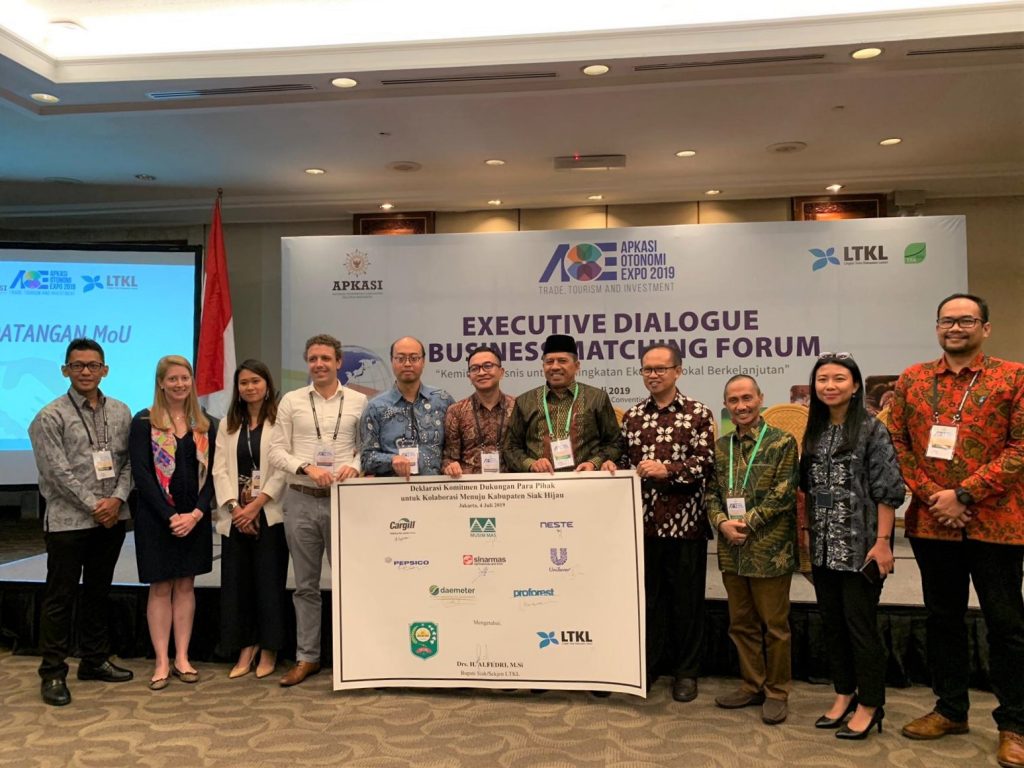 (Above) Members of the Coalition pose for a photo with the Siak government.

The private sector coalition will support the Siak Green District Initiative in its efforts to achieve sustainable Palm Oil , aligning the delivery of their Palm Oil sourcing commitments with the development goals of the District. Specific objectives of the collaboration include the development of a multi-stakeholder platform as a mechanism for discussion and alignment, as well as driving deforestation-free supply chains that support local communities and empower Smallholders , in line with the Siak Green District vision and policy framework.

“With this kind of new collaboration to deliver a joint vision of a Green Siak District, we hope that all communities, NGOs and private sector …[are] concern[ed] for the environment, particularly on Peatland and forest area so fires will not happen again,” said the Regent of Siak.

The Siak District in the Riau province of Indonesia is a long-established Palm Oil production area, with significant numbers of independent smallholder producers. The district is home to important social and environmental values, many of which have been adversely affected by agricultural expansion in the past. The District’s independent Smallholders need support to move toward responsible Palm Oil production, and its remaining protected areas such as Giam Siak Kecil Biosphere Reserve and Zamrud National Park would benefit from enhanced, long term protection. These factors have motivated diverse stakeholder groups in the district to unite to take action.

Notable efforts to achieve a sustainable landscape that balances production and protection goals in Siak have been in place since 2017. The Siak District Government – in collaboration with the NGO coalition Sedagho Siak – has adopted the concept of a ‘Siak Green District’. This commits them to pursuing a balance between environmental conservation and improving the economy for the benefit of local people. Siak District is championing the Green District Initiative as one of the founders and partners of the Sustainable District Platform or Lingkar Temu Kabupaten Lestari (LTKL). LTKL is a collaborative partnership to promote formation of sustainable jurisdictions.

Meanwhile, companies producing and purchasing Palm Oil from the region are increasingly pursuing deforestation-free supply chains that respect workers’ and human rights, and contribute to improving the livelihoods of smallholder farmers. These commitments are often referred to as NDPE : no deforestation, no peat and no exploitation. Companies with NDPE commitments have begun working with their suppliers to trace their supply to the farm level, identify risks on the ground and take action to mitigate these risks. However, experience to date has shown that most sustainability challenges are shared by many suppliers and cannot be solved by individual companies alone. This has led companies to recognize that collaboration with government and other parties is necessary and desirable to achieve responsible production at scale.

Building on these landscape ideas, a coalition of seven companies comprising Cargill, Danone, Musim Mas, Neste, PepsiCo, Sinar Mas Agribusiness and Food and Unilever, and facilitated by Daemeter and Proforest [1], came together to support and strengthen implementation of the Siak Green District Initiative. The companies, in partnership with LTKL, Sedagho Siak, and Climate and Land Use Alliance (CLUA), are working together to build a road map to support the transformation towards sustainable Palm Oil in the Siak District.

“Daemeter and Proforest have worked closely throughout this challenging, exciting process to build common ground among diverse interests of the Coalition member companies, and to lay foundations for long-term collaboration with Siak District government and other local partners,” said CORE (Daemeter and Proforest). “Throughout this process, we have been deeply impressed by the sustained commitment of Coalition members and local partners to talk openly and constructively, to take risks, and to move from theory to practice in collaborative landscape approaches. The Siak program holds significant potential. It’s been a privilege to support the program, and we look forward to its future successes.”