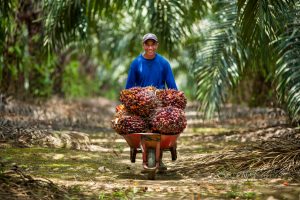 Medan Indonesia, 24 June 2022 – In response to declining prices, the Musim Mas Group announced today to purchase Fresh Fruit Bunches (FFBs) above the market rate to support independent smallholders who sell the FFBs to the Group.

Since the beginning of the year, rising prices as a global phenomenon have been felt in Indonesia too. The higher cost of fuel, fertilizer and food that has increased two to three times has affected the lives and livelihoods of millions of smallholders.

“A drop in the prices of Fresh Fruit Bunches (FFBs) may not seem like much to a typical person, but millions of smallholder’s livelihoods are at stake with the lower prices. As a group that places smallholder livelihoods at the heart of what we do, we decided to buy FFBs higher than the market rate, at IDR 1,600 per kg, to support them,” said Gunawan Siregar, Head of Corporate Affairs at Musim Mas Group .

Smallholders account for 40% of the global palm oil production, yet they lack the resources and expertise to improve yield and produce more sustainably. This is in addition to vulnerabilities such as market prices of FFBs affecting their incomes. Improving smallholder sustainability while maintaining their livelihoods and yields is essential to the sustainable production of palm oil.

Musim Mas prioritizes smallholder livelihoods in its sustainability efforts and has always prioritized support for the district and national’s governments efforts towards improving the lives of smallholders.

The group trains smallholders directly at its mills and third-party suppliers through its Independent Smallholders Program, the largest in Indonesia.

Musim Mas has further scaled up its efforts by working together within the existing government initiatives. The group provides training and capacity-building for Village Extension Officers at its Smallholders Hubs, six of which have already been established across Indonesia. These hubs bring together the government and private sector players, including buyers, to train smallholders and build supply chains to sell sustainably-produced palm.

Over the years, Musim Mas efforts included connecting smallholders to the international market. In 2021, Unilever, PepsiCo, And Nestlé purchased RSPO Credits from farmers associations in Musim Mas’ Smallholders Program. As a result of this effort, smallholders from 4 mills around Riau and North Sumatra obtained a deal worth approximately USD 430,000.

Musim Mas believes such partnerships are the way forward to make sustainable palm oil the norm. In the immediate future, the group hopes the initiative to purchase FFBs above market price will alleviate the drastic cost pressures faced by independent smallholders and will continue to support the government’s efforts to ensure adequate production.